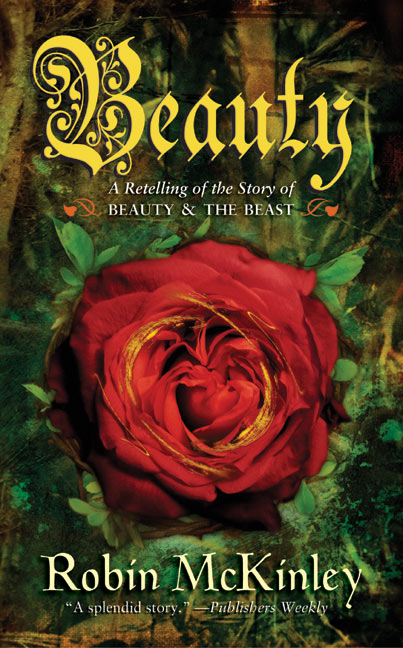 Beauty was the first Robin McKinley novel I was ever aware of. My high school library had a copy, and it was one of the first books on the reading list, as it is recommended in Nancy Pearl’s Book Lust. I actually rented Sunshine, which I thoroughly enjoyed, because I couldn’t find Beauty at my local library. Unbeknownst to me, it was published long before the young adult category existed, in 1978, and so was shelved with the children’s books. Feeling a need to temper a library pile that was weirdly missing fantasy, I tossed it on the pile the last time I visited my library. Unfortunately, it’s another beloved book that didn’t work for me.

Beauty is, as the subtitle puts it, a “retelling of the story of Beauty and the Beast”. It follows the traditional fairy tale quite closely–Beauty, the youngest daughter of a ruined shipping merchant, offers herself in her father’s stead when a Beast demands her father’s life for taking a rose from his castle’s garden. However, McKinley’s Beauty is actually named Honour, Beauty being a nickname for an offhand childhood remark, and her two sisters aren’t vile and jealous, but sweet, kind, and virtuous beauties who love their baby sister dearly. She’s also a bookish horsewoman who privately thinks of herself as “the ugly one”, and everything takes place in a place that’s definitely in our world but may or may not be England. And away we go!

I quite like what McKinley has done with the setting. While Beauty references a lot of the Greek and Roman classics she’s read (she adores Homer but barely tolerates Cicero), we’re never given a specific date and place for the events of Beauty. I assumed 1800s England, personally, but you can interpret however you wish. You probably could find a specific window of time by looking at the books Beauty knows have been published versus the books from the time traveling library, but the fact that it was open-ended allowed it to feel like a fairytale despite having a historical setting. (Come to think of it, the Disney version of Beauty and the Beast does much the same thing–it’s actually set in 1800s Provence. Well, the Disney version of nineteenth century southern France.) The magic isn’t explained all that much; a magician stopped by and punished the Beast for his parents’ misdeeds, according to local legend, and the Beast has some command of a magical language. However, I feel it’s not truly necessary to understand a system of magic in a fairy tale.

Unfortunately, the pace is absolutely crippled by a ridiculously slow beginning. The book is divided into three parts, and not until Part 3 does Beauty head to the castle. (Although, to be fair, Part 3 is longer than Parts 1 and 2 combined.) Parts 1 and 2 lavish attention on Beauty’s family, their fall from riches, and especially the romantic lives of her sisters, who aren’t engaging enough characters to particularly care about. While Hope’s love life is tied to the circumstances that bring Beauty to the Beast and Grace’s love life resolves with the ending (which is so fairy tale-ish it’s almost a little childish), it just takes too long to get to the meat of the story. It does establish how much Beauty loves her family and how she’s dealt with her poor self-image, but it spends too much time establishing it. I do have to admit it took me a little while to get into Beauty because I was dragging my feet about writing a review of Maus, but I think I’d have felt the same if I’d read it any other time.

I was happy to learn that Disney Belle’s bookish tendencies may have been inspired by Beauty’s bookish tendencies here. I liked that she was a serious scholar of her day, applying herself to French and Latin as much as reading everything she got her hands on. While Beauty has mostly come to terms with her self-image, when her image issues rear up towards the end, they’re just annoying. Chief among them is Beauty’s horror at wearing a gooey gown and then her delight in wearing it later, which I thought first was a gender presentation issue rather than an image issue. I was quite disappointed in the ending as well, which rewards the couple with beauty for looking past each other’s looks–it’s so dramatic that I assume McKinley meant for it to be a magical transformation. Way to undercut the moral of the story! I was also a little perturbed to see the supposedly clever Beauty not catch onto obvious clues, such as when she encounters a painting of a gentleman who is obviously the Beast’s human form and dreamily wonders who he was. The Beast fares better; he’s enigmatic and noble, having come to terms with his Beastly nature. But that also robs the story of any sense of a beauty taming a beast; Beauty never really teaches him anything or even corrects him.

The romance is also a bit tepid. Beauty and the Beast seem to end up together only because the fairy tale dictates it. While they’re great friends and the Beast loves her, Beauty’s sudden realization that she’s in love with the Beast was underwhelming. I didn’t feel they had a connection beyond friendship. I’ve always had a bit of a conflict with the fairy tale of Beauty and the Beast, to be honest; when it’s well done, it’s about a Beast overcoming his nature for the woman he loves. When it’s poorly done, it reminds me of Stockholm Syndrome. There’s a wee bit of the latter here, because the Beast doesn’t really evolve as a character and Beauty doesn’t think about the true limits he’s placing on her. However, there’s some subtext that may have affected Beauty’s affections–while she likes the country, she can no longer devote the time she once did to scholarly pursuits, and she watches one of her sisters think about becoming a minister’s wife and all that entails. Beauty would never have it better anywhere else but the castle. (And a bookworm faced with a time traveling library already knows her answer, which is the same one as when a British chap with a TARDIS comes calling.) But rather than run with that admittedly cynical reading, the curse requires true love to be broken, and true love suddenly erupts in Beauty’s heart.

I hate to be negative towards McKinley’s debut novel, since I loved Sunshine so much. Her writing is lovely, but hardly foreshadows her true talent. However, McKinley did write another retelling of Beauty and the Beast, Rose Daughter, which might indicate that she wasn’t quite happy with Beauty. With that knowledge (and that book added to the reading list), I feel better about not liking Beauty.

Bottom line: Robin McKinley’s debut novel certainly doesn’t do justice to the wonderful things she’s written since. With a ridiculously slow start, a tepid romance, and a bit of an uneven heroine, you’ll probably have a better time with some of her newer work.