The Gaslight Dogs by Karin Lowachee 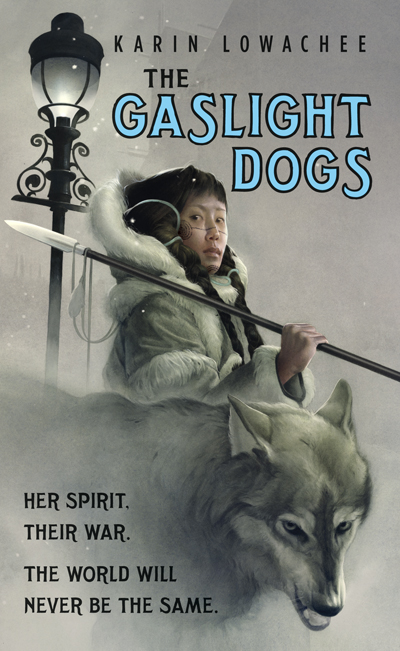 I usually don’t buy newly published titles, even if I really want to read them; I’m always worried that I won’t like it enough to keep it. (This worry can be directly traced to Gregory Maguire’s A Lion Among Men.) But a Barnes & Noble in my area closed recently, and as I scooped up some lovely half-price Austens, I saw The Gaslight Dogs and made a decision–the eight dollars I’m saving by boycotting The Last Airbender ought to be used to support multicultural fantasy. It was a good decision.

The Gaslight Dogs starts off with a murder; Sjennonirk, the ankago (or spiritwalker) of her Aniw tribe, kills a Kabliw (or Ciracusan) man attempting to invade her home and attack her family. For this act of self-defense, Sjenn is forcibly removed from her tundra home and taken to Nev Anyan to stand trial. But she is offered a way out by the formidable General Fawles. In return for her freedom, she must teach Fawles’ son, Jarrett, the ways of the ankago, because, much to Sjenn’s (and Jarrett’s) surprise, Jarrett possesses a little spirit similar to Sjenn’s own Dog…

The learning curve for Lowachee’s world is fairly steep, I have to admit. She tosses you in the deep end, and the occasional use of two names to mean one people can be disorienting. But if you stick with it, it proves quite rewarding. While there are obvious parallels with the American Civil War, Lowachee hasn’t simply scraped the serial numbers off but has instead kept things fresh but familiar. The system of “magic” (Sjenn doesn’t like the term) is well crafted and surprisingly straight-forward. I especially loved the variations of it from tribe to tribe. I have to admit, I was a little worried about the implications of a white man co-opting a native “magic”, but it resolves itself. Lowachee doesn’t make it whites versus indigenous peoples, but “civilized peoples” versus the indigenous peoples of Ciracusa. The two main religious characters are both black, and it’s implied that Ciracusa has alliances with and immigrants from all over the world. I thought that was very well-done.

I didn’t expect Jarrett to be such a main character. In the short interview in the Orbit edition, Lowachee mentions that she loved writing him. He’s a bit of a roustabout but a good military man, chafing under the inescapable reach of his father and rejecting his little spirit and all its implications. He’s nicely complex, and I enjoyed his character arc. But in all honesty, I usually couldn’t wait to see Sjenn. She’s calm, capable, and straight forward, with little taste for the complications of the Ciracusans. Seeing things through her eyes was intriguing, and watching her miss the Land and realize she needs to protect her people from the Ciracusans more and more is heartbreaking. Other standouts in the cast include Qoyotariz, who Lowachee describes as “enigmatic” and “slightly insane” (although I would use much stronger language), and Sister Oza, a priestess representing the Church of the Seven Deities’ interests in the military.

While The Gaslight Dogs isn’t a mad dash against time, it’s wildly compelling–I had trouble putting down to get ready for the day! Half of it is Lowachee’s writing and the other half are the terrific characters–Sjenn is especially vivid. While the ending is ripe for a sequel, it’s still satisfying and resolves a main character’s story arc. The climax does, however, take place mostly off-screen, which gives me pause and it did take a little bit to digest the ending. But all in all, I found it to be quite satisfying.

Bottom line: With terrific characters and a historically familiar but very fresh world, The Gaslight Dogs is ridiculously compelling. While the learning curve is a bit steep, it’s well worth it.

I bought this book from Barnes & Noble.

13 thoughts on “Review: The Gaslight Dogs”