Last semester, I took a 100 level Anthropology class, which was utterly fascinating. There was so much to learn; for instance, did you know that the concept of race is mostly an American social construct? We often mean ethnicity instead. Although I did feel a few steps ahead of the curve when we looked at gender and sexuality, being an ace who often has to try and teach people that asexuality is real and doubting it will rarely endear you to the one you are talking to. But with that class under my belt, I feel much better equipped to take on these two books that look at the female experience in India and in Muslim countries. 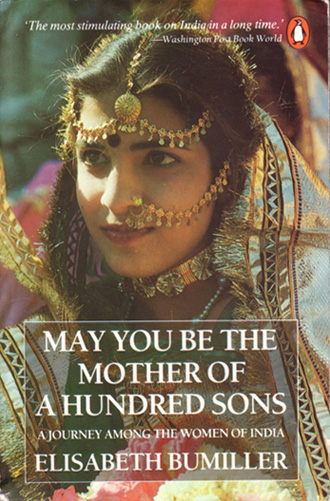 In a chronicle rich in diversity, detail, and empathy, Elisabeth Bumiller illuminates the many women’s lives she shared–from wealthy sophisticates in New Delhi, to villagers in the dusty northern plains, to movie stars in Bombay, intellectuals in Calcutta, and health workers in the south–and the contradictions she encountered, during her three and a half years in India as a reporter for THE WASHINGTON POST. In their fascinating, and often tragic stories, Bumiller found a strength even in powerlessness, and a universality that raises questions for women around the world.

If you think this cover looks like the ’90s, you should see the other one! India is one of the great gaps in my knowledge; I only know its history in relation to the British Empire and that Bollywood musicals are delightful. May You Be the Mother of a Hundred Sons does not only have a wonderful title, but also sounds like a good starting point to looking at the female experience in India. My only concern is that it’s nearly twenty years old.

Aparna Singh at Ultra Violet, a blog for Indian feminists, mentions the book in passing in a post discussing sex-selective abortions in India. She praises its breadth, but notes that it’s a little general, especially in the eyes of an Indian woman. Archana Raghuram at Books, Science and Stories found it extremely eye-opening, especially the more horrifying stories of female infanticide and such. I hope it delivers.

May You Be the Mother of a Hundred Sons was released on April 3o, 1991.

An intimate portrait of the lives of modern Muslim women reveals how male pride and power have distorted the message of Islam to justify the subjugation of women and how a feminism of sorts has flowered in spite of repression.

In my anthropology class, one of our most interesting discussions was on the topic of veiling. I view it as a choice in countries where Sharia law is not legally enforced, but you can imagine that it’s a fairly controversial topic. The idea that a Muslim woman is a victim of her religion absolutely enrages me, and a book that deals with the tender juxtaposition between Islam and feminism seems like a good way to further that emotion.

The proprietor of Books in the City quite enjoyed it, especially the use of Koran quotes to show how some things are being twisted (much like other holy texts!). Trish from Hey Lady! Whatcha Readin’? doesn’t enjoy nonfiction, but did enjoy the book’s portrait of Queen Noor of Jordan. I agree with Trish that nonfiction can be a bit of a drag sometimes, but it sounds like fascinating stuff.

Nine Parts of Desire was released on December 1, 1995.

One thought on “The Literary Horizon: May You Be the Mother of a Hundred Sons, Nine Parts of Desire”