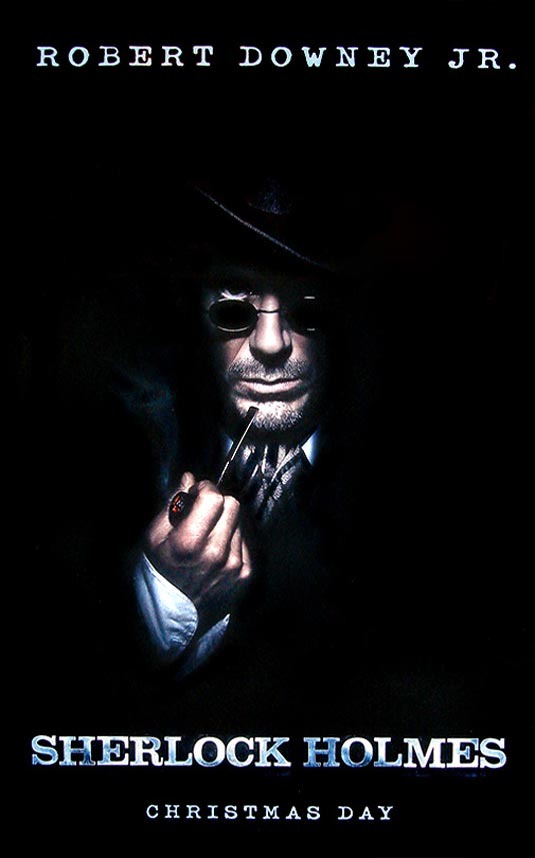 There are few movies I will watch repeatedly within a short time frame. I saw Pirates of the Caribbean: Dead Man’s Chest five times, I think, during the summer it was released. (One viewing involved a forty minute walk in the New Mexican heat because debate kids can’t tell distance on Google Maps.) This rewatchability, I think, is a very specific trait. A lot of people don’t think Dead Man’s Chest is a very good bridge between the other two… but I love it to bits and pieces.

Sherlock Holmes is one of these films. After I watched for the third time in five months a few weeks ago, enjoying it just as much as I did the first time, I realized I should probably review it for The Literary Omnivore!

Sherlock Holmes, if you don’t know, follows eccentric London detective Sherlock Holmes and his partner in solving crime, Doctor John Watson, delving into the case of the mysterious Lord Blackwood, was has apparently risen from the grave and has diabolic and seemingly magical aims on the government. Further complicating matters is Watson’s looming engagement, which irritates Holmes to no end.

I have to confess that I’ve never actually read any of the Sherlock Holmes canon, so I can’t comment on the veracity of the characters to the Doyle canon. So–whether it’s true to the books or not is not my concern. My concern is whether or not it’s a rollicking good film, and boy howdy, does it deliver.

The mystery itself, which is original, is absolutely solid. You don’t know what’s happened until Holmes monologues at Blackwood at the end. However, it doesn’t leave you in the dark about the results of Holmes and Watson’s investigations. A lot of Holmes’ quick deductions are visualized, but we’re not told exactly what it means to Holmes. For instance, there’s a particular clue we see Holmes imagining in use that, at the end, is used to solve the mystery. The solution is hinted at, but never telegraphed. It’s really well-done. The pace is quick, tight, and suspenseful. There’s never really a dull moment.

The acting is probably what gets me every time. Downey and Law are perfect, playing off each other wonderfully, bickering and joking just like two friends who have known each other forever. (There’s a moment where Holmes starts quoting a bit of poetry and Watson joins in, which sounds like every time my friends and I quote Flight of the Conchords.) Downey’s Holmes is brilliant, determined, out of touch, and wonderfully irritating, and Law’s Watson is the perfect straight man to such a character–upstanding, efficient, and curious enough to follow Holmes to the ends of the earth. The rest of the cast is equally amazing–Kelly Reilly’s Mary, Watson’s girl who doesn’t take any guff from Holmes, Mark Strong as Lord Blackwood, and all the rest. My only quibble might be the dryness of Rachel McAdam’s Irene Adler. It works beautifully in scenes where she’s mocking or taking advantage of Holmes (her absolutely nonchalant look after kissing Holmes and knocking him out makes me laugh every time I see it), but it makes her a little too light towards the end. Still, consistency is a virtue in acting!

The costuming and set design is luscious. Before the film came out, nerds of every stripe were wondering if Sherlock Holmes was going to be truly steampunk due to the gritty Victorian England. (It almost is.) Each character is dressed wonderfully–I’m awfully fond of Watson’s cane, which sums up his character nicely–and appropriately. I was delighted to see that Irene apparently has a set of men’s clothes in her size for more active criminal acts, which is actually taken from the canon. The entire look is wonderfully dingy and industrial.

All of this would simply be a fun, wonderful film. What makes it a joy to watch is the soundtrack. Because of The Lion King, Hans Zimmer is already one of my favorite composers. I have four of his scores on my iPod at this very moment. But Sherlock Holmes’s score is honestly daring. It sounds like Zimmer took a damaged piano and violin and went to town on them. It’s the work of a man who knows he can get away with anything at this point. It’s frenetic, vaguely Irish (the only song used is The Dubliners’ “The Rocky Road to Dublin”), and thoroughly deserving of its Oscar nomination.

Bottom line: While it’s probably not the most faithful adaption of Sherlock Holmes, who cares? With a brilliant cast, tight story, and one of the best film scores to grace the silver screen, Sherlock Holmes is a rollicking good time for all.

I saw this in theaters twice, and rented it from Blockbuster once.