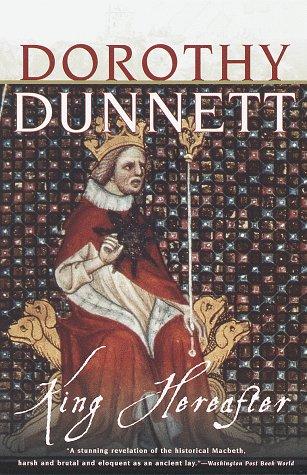 While Nancy Pearl breathlessly recommends Dorothy Dunnett’s historical fiction in Book Lust, she neglected to mention that reading one of her books will overwhelm your reading diet for an extended period of time. Three weeks is a good length of reading time–I can usually get three or four novels under my belt in that time. King Hereafter, on the other hand, demanded all of those three weeks. So let this review start with a warning- while Dunnett is worth the time investment, you’re going to want to clear out your calendar.

King Hereafter focuses on the life and times of Thorfinn, Earl of Orkney, from his childhood on. We watch Thorfinn grow from a preteen trying to get more land to a King trying to defend his kingdom against the many enemies he’s made getting it, aided by his wife, Groa. Dunnett proposes the theory that Thorfinn and the historical Macbeth are one and the same, but it matters very little to the story beyond his Christian name being Macbeth, a few inscrutable remarks, and, of course, the title of the book, which comes from the play Macbeth.

King Hereafter has an extremely steep learning curve. You’re dropped into the world of eleventh century European politics with only a family tree and a map to help you. Names come at you fast and furious, and single characters will often have many names. While the Kings are usually mentioned in the same breath as their territory, bishops and vassals of other countries are murkier. I just focused on the core cast–Thorfinn, Groa, Thorfinn’s relations, and Sulien, the closest thing Thorfinn has to a friend.

Dunnett uses the massive length to her advantage in character development. Thorfinn is marvelously complex. He’s distant, ugly, and unflappable, with a personal motto of “adapt, adapt, adapt”. Most of the time, we see Thorfinn through other people’s eyes. There are plenty of moments when another character, having witnessed Thorfinn forge through a particularly difficult political deal, suddenly realizes that Thorfinn had planned for the outcome all along. One of my favorite things about Thorfinn is his unwillingness to kill his enemies, a fact his foster father laments. Groa, his Lady Macbeth, is equally stoic and proud, although much more beautiful. They start off quite cold to each other–Thorfinn killed her first husband so he could lay claim to the territory of Moray by marrying her. Watching them grow as people and grow to actually love each other is fascinating. Thorfinn’s devotion to her is considered odd by their royal acquaintances. They’re the heart and soul of the book. The supporting cast is, for the most part, just as well-developed, but there’s too many of them to properly care about the individuals. It’s difficult when there’s so many of them that it occasionally feels like there’s a revolving door on the novel.

Dunnett’s great strength in King Hereafter is her depiction of battles and war. We’re not overwhelmed with a play by play of every battle, but we do get to follow Thorfinn into a handful of important battles. The terminology and techniques are flawlessly researched (Dunnett’s research took six years), and she can get across the point of war being a futile hell without saying it. There’s a heartbreaking passage where Thorfinn, desperately caught between three armies, encounters Groa and, for a moment, switches from his battle mode to his regular self. Dunnett’s battles are impeccable.

King Hereafter is huge, and the novel is extremely dense–which isn’t helped by the steep learning curve. It’s not really a bother when we’re focused on Thorfinn, but when the novel spends too much time with characters who are not the protagonist, it can drag. Thorfinn is already distant enough without removing him from the action. While I think Thorfinn’s life story definitely needs to be a long novel, it’s long enough without these distractions from the main story. King Hereafter is about Thorfinn, Groa, and Scotland–everything else is just so much salad dressing.

Bottom line: Clear your schedule. The life and times of the distant, unflappable, and devoted Thorfinn, King of Alba is long enough without Dunnett taking side trips into the minds of his enemies, but Thorfinn’s complexity, his relationship with his queen, and Dunnett’s flawless battles almost make up for it.