A pair of historical fiction novels from before the turn of the millennium are on the menu this morning on the Literary Horizon, taking us from New Orleans to Roman-occupied Britain.

The Feast of All Saints by Anne Rice

In the days before the Civil War, there lived in New Orleans the gens de couleur libre – copper-skinned half-casts, liberated by their owners, but confined by their color to a life of political nonexistence and social subordination. Still, an aristocracy would emerge in this society: artist, poets, and musicians, plantation owners, scientists and craftsmen whose talents and reputations would extend far beyond the limits of their small world.

Mega-selling author Anne Rice’s probing, lyrical style sweeps us into their midst as she introduces Marcel, the sensitive, blue-eyed scholar, Marie, his breathtakingly beautiful sister, whose curse is to pass for white; Christophe, novelist and teacher, the idol of all young gens and stunning Anna Bella, whose allure for the well-to-do white man would become legend.

Here is a compelling and richly textured tale of a people forever caught in the shadows between black and white.

Anne Rice is a lot of things, but she knows New Orleans and its history. Part of the charm of The Vampire Chronicles is watching the vampires interact with New Orleans as it grows into the New Orleans of our time. I’ve never read anything that’s not supernatural by Rice, so I thought The Feast of All Saints would be quite interesting–instead of vampires exploring good and evil, we get to see into a strange and unique world that, thankfully, can never come about again. That’s exactly what I read historical fiction for!

Reviews are difficult to find, due to the book being at least thirty years old, so I’ve turned to the masses. The customers on Barnes & Noble find it a very interesting novel, although a few costumes disliked it because they dislike Rice’s flowery style. I’ve read her work and liked her style, for the most part, so I think I’m in the clear. The costumers on Amazon have much the same opinion–interesting subject material, but Rice’s style can be slow-going. A reviewer does note that stream-of-consciousness, my old nemesis, is used–but I think I’ll brave the waters for the fascinating subject.

The Skystone by Jack Whyte 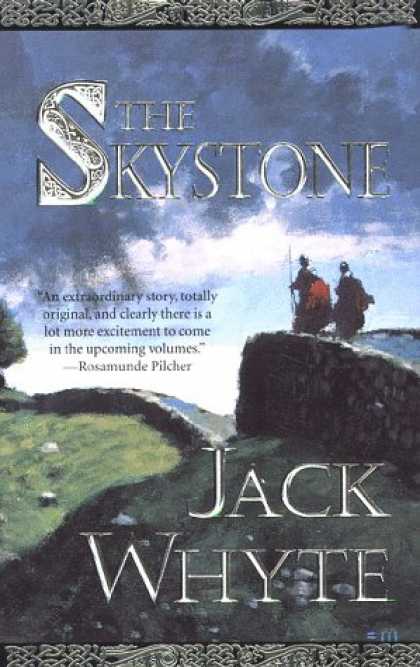 Everyone knows the story-how Arthur pulled the sword from the stone, how Camelot came to be, and about the power struggles that ultimately destroyed Arthur’s dreams. But what of the time before Arthur and the forces that created him?

How did the legend really come to pass?

Before the time of Arthur and his Camelot, Britain was a dark and deadly place, savaged by warring factions of Picts, Celts, and invading Saxons. The Roman citizens who had lived there for generations were suddenly faced with a deadly choice: Should they leave and take up residence in a corrupt Roman world that was utterly foreign, or should they stay and face the madness that would ensue when Britain’s last bastion of safety for the civilized, the Roman legions, left?

For two Romans, Publius Varrus and his friend Caius Britannicus, there can be only one answer. They will stay, to preserve what is best of Roman life, and will create a new culture out of the wreckage. In doing so, they will unknowingly plant the seeds of legend- for these two men are Arthur’s great-grandfathers, and their actions will shape a nation . . . and forge a sword known as Excalibur.

I’ve read retellings of the Arthurian legends that involve Romans before–the fabulous Sword at Sunset comes to mind immediately–but this intrigues me by starting way before most Arthurian legends do. It’s also the start of a series, and I’ve been told that the Merlin found in later novels is just as amazing as Morgaine from The Mists of Avalon. I, of course, cannot start a series anywhere but the beginning, so The Skystone called to me when a later book in the series was recommended to me.

Grasshopper at The Bookshelf Reviews loved it, but noted that it wasn’t as action-oriented as their usual diet and that there were hints that the upcoming novels added a splash of fantasy into the mix. Daphne at Tanzanite’s Shelf and Stuff, however, noted that the beginning involves so much action she had to push herself to get through it! She did like it, though, especially the detail of the writing. It sounds to me like a hearty helping of action mixed with historical fiction (and a little bit of fantasy for flavoring), so I think it’ll deliver the goods.

2 thoughts on “The Literary Horizon: The Feast of All Saints, The Skystone”