The Resurrectionist by Jack O’Connell 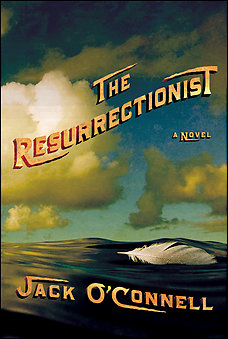 I will readily admit that I thought The Resurrectionist was a period novel when I wrote it down in the book of Books to Read. It describes its protagonist as a druggist–you can hardly blame me! I was quite surprised when I found it was contemporary, but I still decided to give it a shot–certainly, the concept would still play out as interestingly in a contemporary setting, right?

The Resurrectionist is the story of Sweeney, a man whose beloved son, Danny, is in a coma. The novel opens as Sweeney and Danny have moved to the renowned and experimental Peck Clinic, where the Doctors Peck (a father and daughter team) have managed to heal two coma patients. Devastated, Sweeney reads Limbo, a comic book series Danny loved, in order to connect with his comatose child. But Sweeney’s move to the Peck Clinic has garnered the attention of the Abominations, a tribe of bikers who float around from coma clinic to coma clinic in such of something. And the story of Limbo may hold the key to waking up Danny. The novel devotes nearly as much time to Sweeney’s story as it does to Danny’s beloved comic book series about a troupe of circus freaks.

Right off the bat, The Resurrectionist establishes itself as a manly, vulgar novel. O’Connell prefers using the word “ass” to any number of other terms for the buttocks in any context, be it violent, romantic, or domestic. There’s plenty of heterosexual sex, even when it makes absolutely no sense and adds nothing to the story. (To be fair, you must understand my tolerance for sex in novels that are not romance novels is much lower than most other readers. But there’s one encounter that I think will have you agreeing with me.)

Sweeney, a wearied father with anger issues, proves to be a mostly sympathetic protagonist. He’s quite a gritty fellow, avoiding sleep and tossing himself into his work to avoid dealing with the tragedy that claimed Danny. The novel spends a few chapters with Doctor Peck, whose creative process is a joy to watch. He’s amoral for the sake of progress, a trait his poorly written daughter seems to have inherited. The Abominations are a rowdy, filthy, degenerate bunch with their leader, Buzz, serving as their parent. Over the course of the novel, the Abominations are surprisingly endearing, due to their childlike natures.

The  main problem with The Resurrectionist is that Limbo, the comic book series Danny is fixated on, is wildly inappropriate for a boy of six. There’s horrific blood, gore, philosophical issues, threats of rape, and a hermaphrodite with a cutting wit. While I enjoyed the freaks’ story much more than I enjoyed Sweeney’s story, I found it very implausible that such a dark and mature story could give rise to a media empire aimed towards children. We are meant to accept Limbo as that, and I can’t do that. What kind of parent would allow their little ones to read about the various horrors that occur to a band of circus freaks? And what kind of television executive green lights an animated version of it?

The style, however, is quite good. O’Connell has a devious and wicked sense of humor here, and an eye for interesting, gritty, and fresh descriptions. His writing is accessible and gripping, the hallmarks of a good thriller writer. He’s quite good at drawing out suspense, hence my continued interest. When we have a chance to see through the eyes of a child, O’Connell gets it down perfectly. My only quibble here is that O’Connell never quite decides which pronoun to use for Milena, the hermaphrodite–although she obviously identifies as female, he goes between regular female pronouns and calling Milena a “s/he”. It feels lazy, in a way.

While I won’t give away the ending, it’s underwhelming and unsatisfying. Sweeney’s actions towards the very end bewildered me, after I spent a novel feeling sorry for a man devastated by his son’s coma and learning to like the Abominations. It takes the scant promise of the premise and all the goodwill we’ve developed towards Sweeney and smashes it into little tiny pieces for reasons I cannot discern. The open-ended ending resolves absolutely nothing.

Bottom line: Despite its interesting premise, The Resurrectionist falls flat. It’s a little offensive, a little underwhelming, and very unsatisfying. You might want to try one of O’Connell’s other works before you consider trying this one.

2 thoughts on “Review: The Resurrectionist”