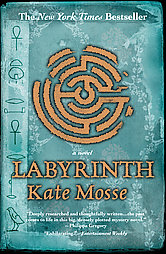 I do have to say that I once turned down an opportunity to read Labyrinth during my last volunteering stint at my local library. The reason? The blurb on the back of the novel, which is a quote from the author:

The Grail legends are usually about men with swords and women getting rescued. I thought, ‘You know, I want the women to have the swords.’ It’s all about them doing their things, they get lots of sex, and they fall in love, but that’s not the point of the story for them. They are the heroes.

That blurb reminds me of nothing so much as MightyGodKing‘s alternate cover for Marion Zimmer Bradley’s The Mists of Avalon, which renames it Camelot: Feminist Version. I’m a happy feminist, but the blurb just made me cringe, as it made Mosse sound like she thought turning the gender tables in such stories was a completely new idea in 2005. Disregard the blurb–the novel is well worth the read.

Labyrinth is the entwined story of two women–Dr. Alice Tanner in the twenty-first century and Alaïs Pelletier in the thirteenth century. On a dig in France, Alice stumbles across a cave containing two ancient skeletons, a strange glyph of a labyrinth of the wall, a strange ring, and a mysterious satchel. Alice’s discovery draws the attention of a handful of very powerful individuals who will stop at nothing to recover the secrets of the Labyrinth cave. In southern France, as a Crusader army marches toward her home of Carcassone, Alaïs is entrusted by her father with a mysterious book that she must protect at all costs. Alaïs can hardly imagine the secrets she now carries, and the sacrifices she must make to protect them.

Alaïs’ story is the superior of the two, partly due to the wonderful character of Alaïs herself. While she is seventeen, she’s hardly an ingénue–she’s a young and plain wife who loves her husband and adores her father. She’s not overly rebellious, although she often thinks her way is best. She’s handy with a sword, but believably so for such a slight woman. In short, she’s a nicely complex and realistically historic character. Her life includes some of the best twists and turns of the novel, and also has the best villains–Alaïs’ deliciously evil sister, Oriane, and the glowering and ruthless Crusader, Guy d’Evreux.

I didn’t know anything about Occitania, a region that includes the southern half of France, or about the Crusade against the Cathar sect. It was quite an interesting history lesson. It may have appealed more to me, as I’m half French, and I could compare the Oc language against the French language. Still, it’s a very interesting and little known piece of history even if you’re not French, and Mosse really brings it alive through the eyes of Alaïs and her companions.

Alice’s story, while decent, just can’t stand up to Alaïs’. Occasionally, it reads like a dated thriller, especially towards the end, as characters make some choices solely out of the need to move the plot along. That’s not to say Alice’s story is not without its shocks and thrills–when a character vanishes early on in the novel, they reappear in a way that made me gasp out loud. Alice is certainly capable, but she’s just not as interesting or well established. We learn that she drinks, just broke up with a long-term boyfriend, and has recurring nightmares about Alaïs, but not much else. I wonder if this is because Alice is up against Alaïs in the personality department.

The best part about Alice’s story is the mysterious Audric Baillard, who knows a great deal about Alice’s discovery and Alaïs’ life. I won’t say any more about Audric for fear of spoiling you, as his story is one of the best parts of this novel, although I find his motivation, finally revealed at the end, a bit weak.

Labyrinth revolves around a mysterious labyrinth and the Holy Grail. I don’t know a lot about Grail lore, but the lore Mosse provides is fascinating, especially its history. I don’t wait to spoil too much, since it is a thriller, but there’s something just thrilling about the origin story put forth here. Mosse uses plenty of tricks to keep the reader, but not the character, from knowing everything about the Holy Grail and the mysterious Labyrinth Trilogy of books until the very end of the novel.

Of course, Labyrinth isn’t perfect. The prologue and epilogue are both written in present tense, which threw me for a loop. Alice and another character, Will, are thrown together as a couple simply because they echo Alaïs and her husband, Guilhem, which annoyed me and cheapened Alaïs and Guilhem’s complex and loving relationship. Mosse also switches between the Oc and French words for locations, apparently to differentiate chapters between French perspectives and Oc perspectives. It just bothered me. Still, most of the flaws are found in Alice’s story–Alaïs’ story is fantastic.

Bottom line: A deliciously twisty historical thriller that misses occasionally, the story of Alaïs in the thirteenth century outshines her counterpart, Alice, in the twenty-first, but both made Labyrinth well worth the read.

I rented this book from my college library.

One thought on “Review: Labyrinth”