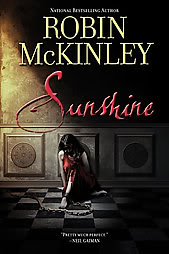 I picked up Robin McKinley’s Sunshine because her Beauty: A Retelling of the Story of the Beauty and the Beast was not in at the library. Beauty has been recommended to me by Nancy Pearl’s Book Lust and a male friend of mine. Sunshine’s story looked quite interesting, and, of course, there’s a quote on the jacket from Neil Gaiman, calling it “Pretty much perfect”. It’s got all the qualification I need!

Sunshine is the story of Rae Seddons, nicknamed Sunshine, a coffeehouse baker living after the Voodoo Wars, wherein humans battled against the Others. The Others covers all supernatural creatures, but humankind’s most dread enemy is the vampire. One night, Rae decides to drive up to her grandmother’s abandoned lake house, when she is suddenly kidnapped by vampires, and chained to a wall in a ballroom in an abandoned mansion. She is obviously meant to be a treat for the other vampire in the room, but he does not harm her. In fact, he needs her help.

I can’t say too much more about the plot without giving away some of the truly marvelous things that occur, but the book is made up of four parts, and Sunshine’s capture only covers Part One. After she manages to escape (with the vampire, Constantine, in tow), everything takes a turn for the much, much worse.

I’m not quite sure why Sunshine is pegged as either romance or “a tale of supernatural desire”. True, there is a moment when Rae accidentally calls upon a resting Constantine, and they have a sexual moment (which, according to Rae, lasts about all of ten seconds) before Constantine realizes what is happening, but that’s the extent. While Rae occasionally ponders about the implications of their relationships (such as her tendency to be underdressed when they meet), that’s really as far as it goes.

The world McKinley was created is very well done. While we first learn of the Voodoo Wars to explain why people don’t go up to the lake, it’s slowly revealed just how different this world is–from the variety of Others (and what they do), a special police task force to deal with said Others (the SOF), partbloods, magic handlers, and even new curse words. Rae lives in New Arcadia, which is somewhere east of Manchester, and huge swathes of cities have been destroyed in the war. The way the magic is described in this novel, and how wonderfully commonplace it is, is a wonderful little touch.

Rae is a great heroine, flawed and vulnerable but determined. As the novel progresses, Rae learns more about her heritage, including that of her missing father’s, a powerful magic handler. There’s a marvelous scene where Rae, talking with SOF officers, realizes there may be something even further to her heritage, and the realization is just crushing. Rae does not want to be what she’s becoming–she just wants to be a regular coffeehouse baker, who likes to read pulpy vampire novels and hang out with her wonderful boyfriend, Mel, and her best friend, a librarian named Aimil.

The characters are all very heartily realized–Rae’s mother frets over her and wants her to get married, her brothers are struggling through high school, derelicts drift in and out of her stepfather’s coffeehouse. The atmosphere of the coffeehouse is just so warm, inviting, and filial–it made me want to be there, and I hate coffeehouses. McKinley does a marvelous job with atmosphere, from abandoned mansions to Rae’s home to the “bad spots”, where evil magic is particularly thick. It’s all very immersive.

This is all helped by the fact that Rae narrates the novel–we don’t learn her real name, Rae Seddons, until a good bit on in the novel. Rae is just so wonderfully human, despite all that happens to her. She goes hiking with her boyfriend. She rents a house from an eccentric old woman. She hits up garage sales for old vampire novels (currently out of vogue, due to the wars). She gets up at four every morning, so she can start baking for the morning crowd. Rae is just so wonderfully realized against the backdrop of the supernatural vampire world she finds herself ensnared in.

Believe me, these are Vampires with a capital V. They play with their food. They’re vicious. They have fangs. Even the most bloodthirsty of vampire fans will be quite satisfied with McKinley’s otherworldly vampires.

I suppose I would label this novel suspense more than anything else–the reason I’m desperately trying to keep the plot hidden from you is because it would ruin it for you. This is the sort of novel you put away until you forget a fair amount of the plot, so you can enjoy the twists and turns again. Events climb on top of each other to build up to a stunning climax.

I’m not head over heels in love with Sunshine, but it’s quite close.

Bottom line: Robin McKinley’s Sunshine is an engrossing tale of supernatural suspense, with a marvelously human and realistic main character, Rae Seddons, struggling against the very powerful vampires of her postholocaust world. Definitely worth the rental, if not a buy.